Well if you were under any misconception that the Cold War wasn't heating back up, this will make you feel all warm and fuzzy.  The Russians have just tested their new flying doomsday command center, based on a Ilyushin Il-80 aircraft.  It has the capability of running the country's armed forces in the event of World War III.  The aircraft has no external windows, to shield it from a nuclear blast an EMP (electromagnetic pulse).  Essentially it appears that this is Vladamir Putin's version of Air Force One…on some serious steroids.   There's no mention of the weapons or defense capability of this aircraft, but you can be sure if it's built to withstand a nuclear event, it's likely got some cool offensive and defensive toys under the hood.  Given the recent Russian military stance in the region, it's a bit unsettling to see that they've put their preparation to deal with a nuclear doomsday into high gear.

Russia’s new airborne command center is especially designed to have high survivability and reliability in case of war, specifically an all-out nuclear war. Technical specifications of the permit of the Ilyushin Il-80 include managing communication networks of Russia’s land forces, navy air and space forces, as well as the Strategic Missile Forces.  Read the full article here.

The Ilyushin Il-80 Maxdome aircraft is meant to be used as an airborne command center for Russian officials, most specially President Vladimir Putin, in the event of nuclear war. The aircraft has no external windows to shield it from a nuclear blast and nuclear electromagnetic pulse. Only the upper deck forward door on the left and the aft door on the right followed the design of its predecessor passenger aircraft, the IL-86. Learn more about this aircraft at GlobalSecurity.org

What do you think?  Does Russia know something we don't?  Are we closer to the brink of WWIII than ever before? 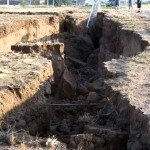