What’s behind the oil price drop?

Oil prices are at their lowest levels since 2009, and could drop further.  Cheap energy and gas is something most of us can appreciate, but what will low oil and gas prices mean in the long term for people and governments?

Will it threaten green energy?

Is it all just a temporary dip – or can we expect to see these prices (or lower) in the coming years?

What’s really causing a 60% drop in the oil price?

There are many questions that have to be answered, but there isn’t a single good answer.

Energy prices, although, one can argue that it’s just about supply and demand, are actually extremely complex – it’s one of the most complex markets there are when you take into account all the factors involved.

Oil and gas is much more than petrol for your car; it’s also one of the main expert revenue for many countries, a necessity for petrochemical industry, and a source of domestic energy for many households. Sustaining low oil prices will have serious implications for people all over the world, both in the developing and developed countries.

Many countries rely on oil export for their social safety-nets and public spending. Interest rates may also increase, as lower energy prices increase spending on other consumer goods.

Like we’ve seen before, the prices of oil and gas will probably increase again – sooner or later. But due to the supply side fundamentals, the prices will likely stabilize at a lower level than what we’re used to.

No one can truly predict the price — not even experts who have it as their day job. One of the best estimates I’ve seen is from a Bloomberg article earlier this year, where the experts looked into the crystal ball and predicted somewhere in the $20-200 range per barrel. I think that’s as good as it gets …

Why have the prices declined?

The lower oil prices shouldn’t come as a shock to many. Already in 2014, EIA and IMF have predicted a substantial lower price beginning in 2014. All though the experts in IMF and EIA were right this time, there were 4 factors that made the price disruption sharper than anticipated.

Will the prices stabilize – and if so, where?

A major turning point has been the fracking industry. Conventional oil drilling, and especially off-shore wells take a long time to bring supply online. A typical shale well can be completed and ready to deliver in 30-60 days. This has again limited the possibilities for exporting markets to disrupt supply and control prices.

Shale oil is still a non-renewable energy source, so sooner or later more scarce resources will affect the market price, but this won’t happen the next couple of years.

For energy exporters who rely mainly on oil exporting revenues, such as Russia, Venezuela and Iran , lower oil prices is a vulnerability to their economy. However, when the energy price (quoted in $USD) decreases along with local currencies depreciating, the governments receive more local currency for each barrel of oil exported.

A central factor in the sharp price drops, analysts say, is the continuing unwillingness of OPEC, a cartel of oil producers, to intervene to stabilize markets that are widely viewed as oversupplied. Prices of OPEC’s benchmark crude oil have fallen about 50 percent since the organization declined to cut production at a 2014 meeting in Vienna.

Iran, Venezuela, Ecuador and Algeria have been pressing the cartel to cut production to firm up prices, but Saudi Arabia, the United Arab Emirates and other gulf allies are refusing to do so. At the same time, Iraq is actually pumping more, and Iran is expected to become a major exporter again under the recent nuclear deal.

What about importers? According to this article (http://read.hipporeads.com/why-oil-is-cheap-and-what-it-could-mean-for-your-country/), the oil price dip has more winners than losers:

Although the view for energy exporters is grim, a low energy price environment creates more winners than losers. As consumers in emerging markets typically spend more on energy as a percentage of wallet share than consumers in developed markets do, they gain disproportionately when energy prices fall. Transportation costs for consumers and businesses also decline, increasing margins for companies that control their supply chains. In markets where growth is slowing, companies can pass additional savings onto consumers. In the Philippines, for example, the lack of existing energy subsidies mean that consumers gain immensely from declining energy prices and can spend their cost savings on discretionary items.
However, the pace of gains to governments and consumers in energy importing markets is much slower than the pace of loss to exporters, and their extent depends on how much governments subsidized energy before. Since governments in emerging markets heavily subsidize energy costs for their citizens, consumers might not see prices decline much, if at all. In Egypt, for example, subsidy removal will mean that consumers actually pay higher transportation and food prices overall. In developed markets, such as Europe, heavy regulation of energy markets prioritizes more expensive renewable energy on their grids, meaning that consumers will not see lower oil prices hit their pockets. Moreover, fears of deflation in the Eurozone, exacerbated by cheaper oil, might see European consumers rein in spending and cancel out potential gains from cheaper energy.

Will this promote green energy?

All though some experts believe that lower oil price will pose a threat to renewable green energy (i.e. this Bloomberg article) lists 7 reasons why cheap oil won’t sidetrack transition to cleaner energy — where this one is the important one:

You may have seen this chart before. It’s the most important chart. It shows the reason solar will soon dominate: It’s a technology, not a fuel. As time passes, the efficiency of solar power increases and prices fall. Michael Park, an analyst at Sanford C. Bernstein, has a term for the staggering price relationship between solar and fossil fuels: the Terrordome. 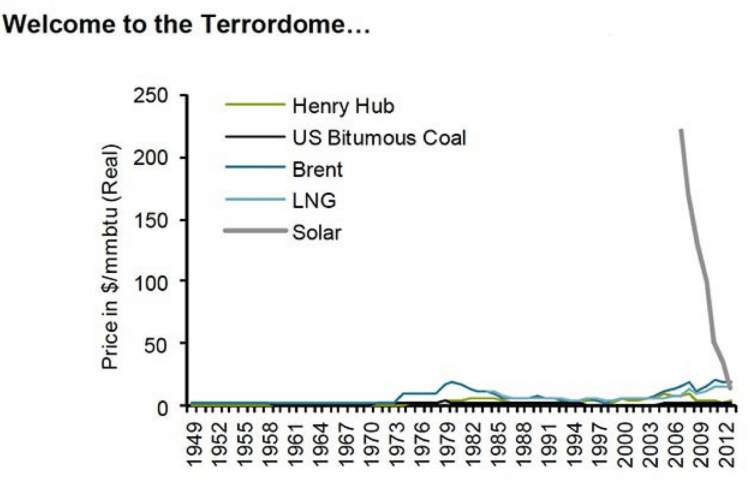 In the end, the cost of travel and transporting goods has a direct impact on consumer pricing for goods and services.  But everything is cyclical in the commodities market.  There will most likely always be a demand fossil fuels, but need will change.  It’s only been a century since the world became reliant upon a finite energy source (fossil fuels), and already we are concerned about the supply and demand side of things.   Imagine a world where cheap, affordable energy was available to everyone. 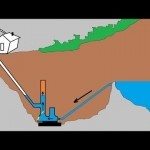 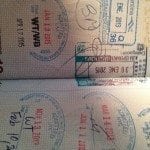